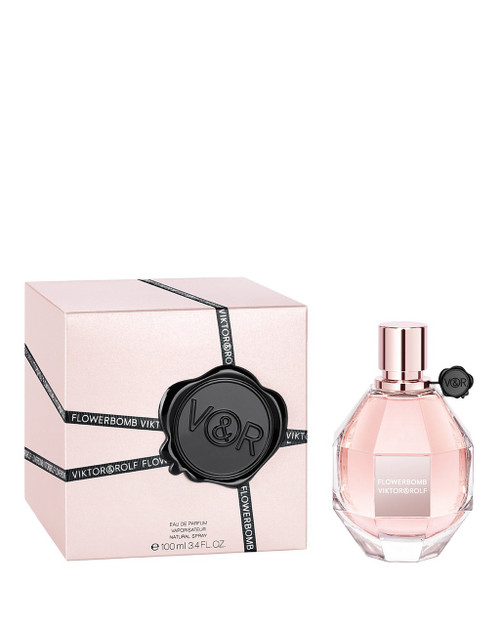 Flowerbomb By Viktor & Rolf is categorized as an oriental perfume. This floral explosion releases an excess of flowers that has the power to make everything seem more positive. Magically powerful notes immediately awaken your deepest senses, giving you the impression of living life in your own secret garden, away from reality.
Fragrance Notes: Bergamot, green tea, Sambac jasmine, Centifolia rose, freesia, Cattleya orchid, musk and patchouli.

About The Brand: Viktor Horsting and Rolf Snoeren met while studying fashion at the Arnhem Academy of Art and Design in The Netherlands. They began working together upon graduation. In 1993 they won a talent contest at the Festival International de Mode et de Photographie in Hyères, and moved to Paris in the same year. In 1998, Viktor & Rolf put on a forbidden fashion show during Paris Fashion Week to attract the press. In 2005 they opened their first shop in Milan which closed in 2008. They were later contracted by L'Oréal to develop their first perfume, called Flowerbomb. In 2006, their first men's perfume, Antidote, was introduced in the United States.
×

Lalique By Lalique For Women

Guess By Marciano For Women

Euphoria By Calvin Klein For Women

Gucci Guilty By Gucci For Men

Eternity By Calvin Klein For Women

Gucci Bamboo By Gucci For Women